Error example: The case of the not quite identical clones.

This is the story of one error in a system with two approximately cloned units.

The error message is simple.  It says that a FC 36 8 input qualified or (QOR) block does not have enough inputs wired to be able to trigger a "1".
Image 1 shows the following DBDOC aspects of the error message, starting from the Error Browser.
Image 2 shows how Error Browser brought up the flagged block in the sheet.
Note, however, that this is a clone of another unit, which did not have the error.
Image 3 shows how Hyperview text searching finds the reference text to resolve this question.
The error, it turns out, was introduced when the rung block was changed into AND logic implemented with the FC 36 block, but incorrectly.  There is a good reason not to have cloned errors.
Cloning is beautiful - it replicates tested, working logic.  When a message or error is noted, it would be expected to be in all similar instances.  If a message is not replicated, it can mean:
The error in this example is in the third category, logic that is not exactly the same in the clone.  Watch out for situations like this!
Posted by Geoff Michaels, P. Eng. at 10:05 AM No comments: Links to this post 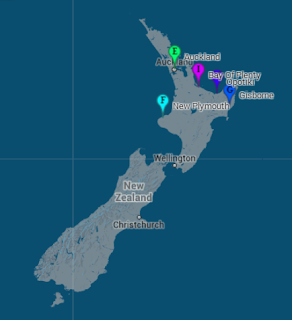 Since arriving Sunday evening we have had a very busy week. Monday was spent driving from  Auckland to New Plymouth by roads that twisted, turned and climbed. There are other highways that go more directly but we enjoy the challenging ones, if there is time. The scenery was spectacular, as you can see from some of the pictures. From a historical view point, many (if not all) of the green treeless hills (mountains) you see were treed in about 1850.

On Tuesday and Wednesday we worked with contractors and clients. We will have a good relationship with the three plants in the future.  On Thursday and today we have had great touring days. We are a couple of 100 km from New Plymouth, but have not started going north. Again, the scenery has been spectacular.   Next Monday and Tuesday we will spend two days doing DBDOC workshop and training sessions at client  sites.

﻿﻿
Sunday driving on the eastern coastal highway 35 from Gisborne to Opotiki we saw miles of sandy beaches. The British explorer, Captain Cook’s cabin boy, Young Nick, sighted a piece of land (now called Young Nick’s Head)  near Gisborne in 1769. This was the start of Britain’s relationship with New Zealand. We travelled north-east along  the coast towards Opotiki. Noon lunch was a picnic overlooking a wide, sandy beach with rolling surf and bright blue water.

Inland there were many farms with thousands of sheep, cattle and occasional herds of horses. The countryside was covered with lush green grass and occasional groves of trees. There were large volcanic shaped hills everywhere, an the occasional plateau of grass. An interesting tree is the cabbage tree, which has clumps of leaves that look like  cabbages on their branches.

As part of the day we met on the road two steers and a cow. Our car came to a stop. The cow gingerly walked by on the other side of the road. The steers took a second look, thought for a while and then decided to follow her lead.

As they passed by, we slowly moved forward.
﻿﻿﻿﻿ 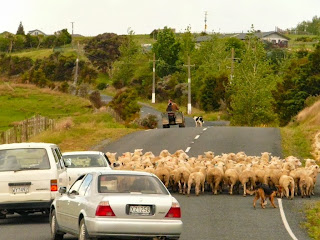 A short time later we met a herd of 50 or 60 sheep. We moved slowly forward. Then we saw the source of their movement, a small truck was slowly moving behind them, herding them down the highway. Hopefully, the procession did not have far to go.

An hour further down the road we met two spirited horses, who had just opened the latch on their pasture gate and were enjoying a run down the grassy ditch. Next, we were treated to great seaward views over The Bay of Plenty. It is a natural U-shaped harbour.

The rest of the drive was less eventful, and by evening we arrived at our B&B. Here we were treated to a great steak supper to complete the day. Tomorrow will start two days of DBDOC workshop and training sessions at Tasman Paper.

Posted by Shirleyanne Michaels, M. Ed. at 10:00 AM No comments: Links to this post