These examples are taken from current projects being engineered at this time. I offer them for amusement and comment. You can decide if they are good engineering or not.

First some prototype logic that works, but might not be termed "nice". The block will serve as a 5-input OR block, but the second input is wired, not the first. It works. It is also booby-trapped, as proven by how this logic was cleaned up in the same project. 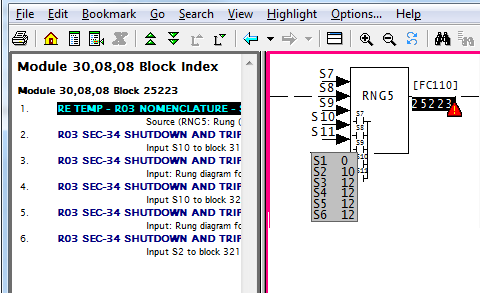 Next (below), you can see how that logic got cleaned up. Not nice at all, eh? The output is always Boolean 0 and the input on S8 is always ignored.

Why did  this client not get burned? DBDOC gives a message when the input on S8 is not being used, as is the case here. Note also that only DBDOC shows the ladder logic diagram based on what is there. Close call for this client, but no harm done. 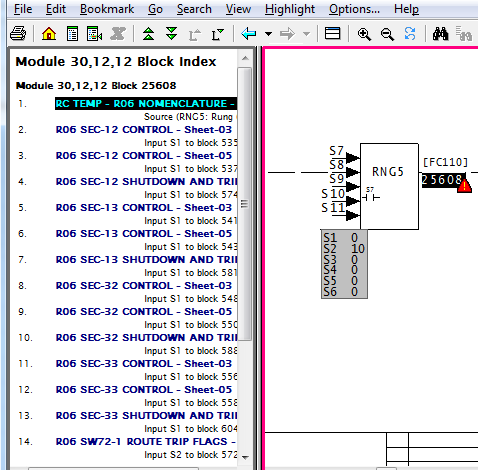 Finally, where it was done nicely in a different system. It is absolutely natural and works. The unused specifications have been cleaned up correctly. 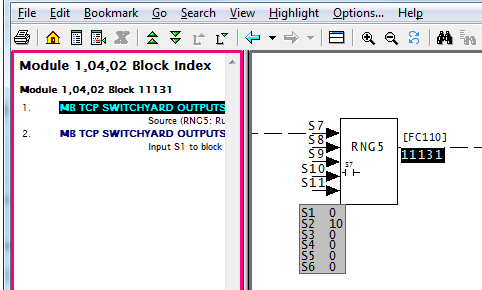 You might ask why leave the rung block in there at all? Good question. It allows for changes to be made later to add more conditions. I do not know if people get paid by the block, but that would also justify it. Also, why clean up the specifications. In the ugly case, it changed working logic into non-working. Left alone, any additional inputs would be OR'd in as expected.

If this were your system, would you insist on S7 being used for the first input? Would you let the specifications be changed to make it work?

Funny? What do you think? What would you accept?

Posted by Geoff Michaels, P. Eng. at 1:49 PM No comments: Links to this post

50% of Systems Have Certain Function Blocks Unintentionally Disabled. Is Yours One of Them?

DBDOC is unique in giving you significant help in finding integrity issues in your system. Every INFI 90 system in the world will benefit from improving safety, reliability and operation with DBDOC's Integrity Plus approach. Our Error Browser and Error Marker development was designed to make it possible to manage errors and improve the integrity of your systems.
In our most recent versions, we have added tests for three function blocks that are disabled by default.
For a function block to be disabled by default is horrific. Only three of the 200 types or so are (the rest are enabled by default). The hapless users put function blocks in place, but they do nothing that they were intended to do, because they are disabled. Now and forever, they are booby-trapped.

What do you think? Can there be any justification for most function blocks being enabled by default, with only these three exceptions?


Am I wrong? Are there other booby-traps we have missed? Please let us know.

What about the "real world" - places where DBDOC checking has not been used yet? Here is what this test detected in a small power plant being worked on now by extremely competent people: 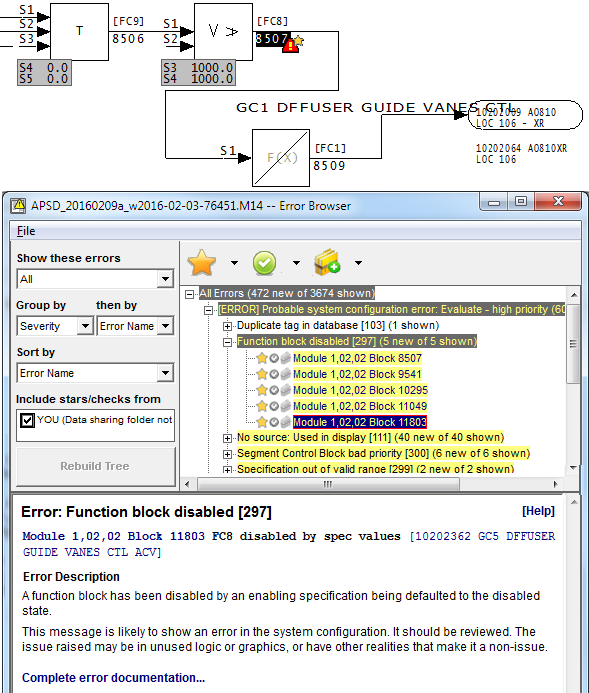 Holy Rate Unlimiter, Batman! http://holysmokesbatman.com/directory contains 350 actual sayings, perhaps the best being "Holy Time Bomb".
The 5 errors out of 152 Rate Limiter blocks show that only DBDOC can protect you from these problems.
Here are examples of each from real systems. 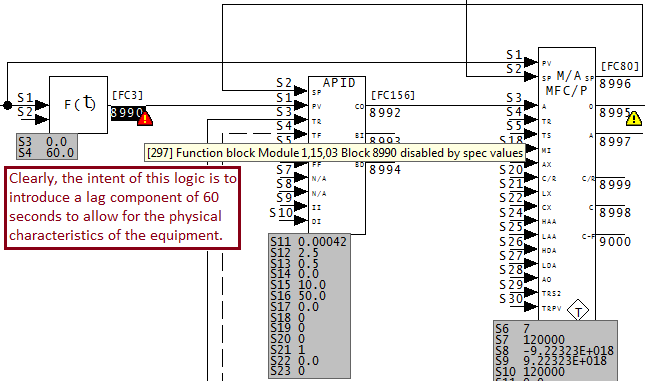 The objective of this FC 3 Lead/Lag block is to apply a time constant of 60 seconds to changes in the PV as applied to the APID control algorithm. This is not happening here because, unbeknownst to (or unnoticed by) the DCS specialist, the block is disabled and feeds the input directly to the output.

The first Rate Limiter example looked like it was booby-trapped in the sense that sometime in the future an unsuspecting body would put meaningful values on the limits and expect them to work. As you can see here, the negative going rate limit of 0.00333 per second presumably is intended to prevent larger drops in the value from affecting the process. However, the block does not function. 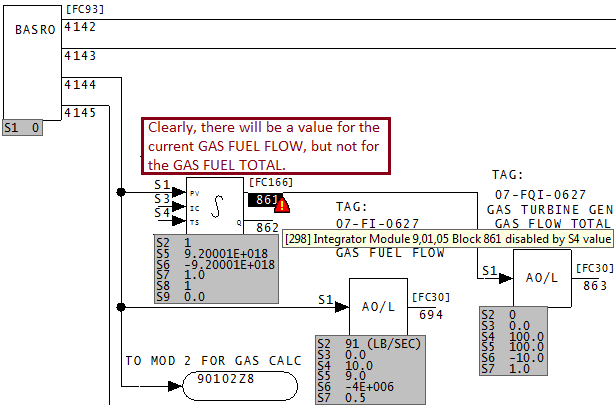 In the case of the integrator, it is S4 that is the trap. Clearly, nobody puts an integrator and tag into a system not intending to get data. This one will not get data because S4 is not wired to a constant value 1.
Only DBDOC can improve your system integrity by detecting these relatively common oversights.
﻿
Posted by Geoff Michaels, P. Eng. at 2:24 PM No comments: Links to this post

DBDOC is unique in giving you significant help in finding integrity issues in your system. Every INFI 90 system in the world will benefit from improving safety, reliability and operation with DBDOC's Integrity Plus approach. Our Error Browser and Error Marker development was designed to make it possible to manage errors and improve the integrity of your systems.

In August 2014, we showed examples of detectable TSTALM errors from one system, but we continue to find this error being made. We have been reporting it for a decade, since 2006. DBDOC is the only valid way to identify this problem.
We report Function Code 69 TSTALM blocks that test the same block and mode. This usually happens when a TSTALM block is copied without S1 the specification that tells what block is being tested being made to match the new block numbers. Any of these TSTALM problems could have an adverse affect on a plant.
I did a review of test data for 228 systems around the world:


The three systems with the largest number of messages looked like this:
Holy Crossfire, Batman! This is from http://holysmokesbatman.com/directory.
The problem is that good logic gets cloned to do the same job again and again. The block numbers get changed and the changes compile cleanly. However, S1 must be changed when the logic is cloned in the same module, because the cloned value of S1 is guaranteed to be the only block in the module that is wrong. The failure to do this is not caught by Composer or WinCAD compilers, so the error does not get corrected.
Let's start with an example. Here is our message, as shown in Error Browser, with the good stuff circled in green: 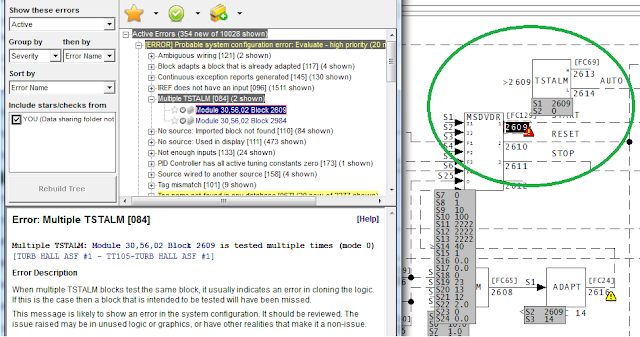 Block 2614 is clearly expected to be asserted when block 2609 is put into Auto mode.
DBDOC shows you the block index for block 2609, which you see here with the green highlight for the intended and correct logic. 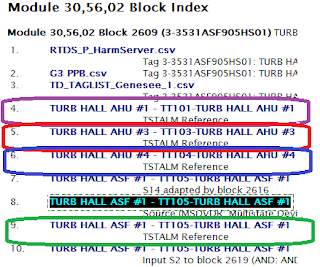 What do you make of the purple, red and blue highlighted references? Click on each of them to go to the TSTALM block that is strangely testing block 2609. 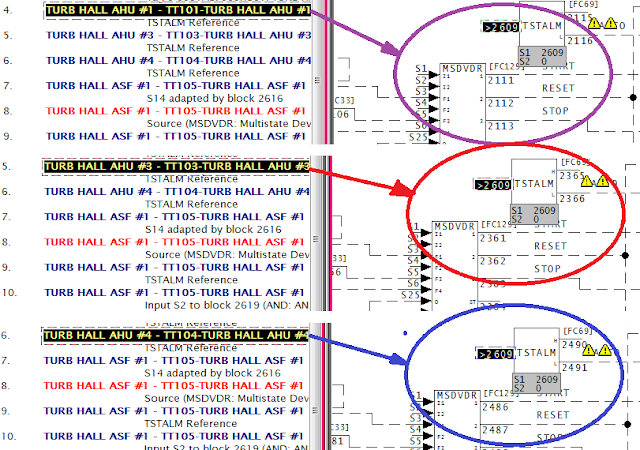 S1 of block 2115 (purple) obviously should be 2111, not 2609.
S1 of block 2365 (red) obviously should be 2361, not 2609.
S1 of block 2490 (blue) obviously should be 2486, not 2609.
Count the errors:
Six errors for the price of one! Good value from DBDOC, eh?
Composer should be made to set the value of S1 to -1 when a TSTALM FC 69 block is placed on a page. The illegal value should force the user to enter one that would work.
Note also that the warning triangles (Error Markers) are in front of you when you get to the dysfunctional logic, so you can see right away that there is possibly a problem. The two messages they show are:
Tested block on different page (which should be a clue), and
TSTALM block tests subsequent block, which means they are out of natural sequence.
I have found as many as seven such duplications (that is, 14 errors) that came from the cloning of a single set of functioning blocks. Clearly, this error can be made and missed. DBDOC can find it for you.
When you review these using DBDOC Error Browser, you simply hide any that are of no consequence. You flag ones like this that affect the process. When they are fixed, they will disappear from the diagnostics. If you create such an error, it will show up as a new error, highlighted in yellow.
DBDOC helps improve your system integrity.
Posted by Geoff Michaels, P. Eng. at 9:36 AM No comments: Links to this post