A System Without DBDOC - Analysis I

This is the first of a series summarizing the severe errors found by DBDOC at INFI 90 sites that do not have our product for system integrity protection. Be assured that there are more errors in this system than the ones shown here, but this article highlights some of the glaring ones. The system has 5723 configuration sheets at a large power plant. This site gets no warning from its existing tools about the errors described below!  DBDOC, however, would be able to alert it to all of them.

There are two adapt block cloning errors, caused by failure to change S2 to match cloned logic. Two subsystems are not adapted, even though they look like they are. 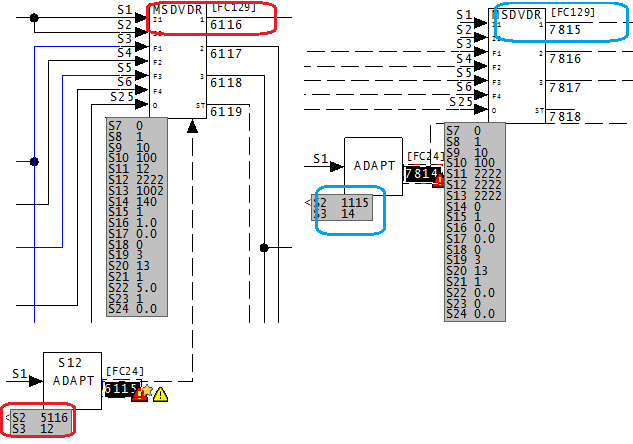 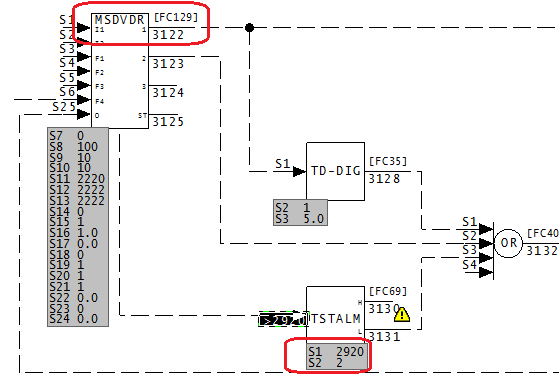 Why fourteen? One instance was cloned badly six times. 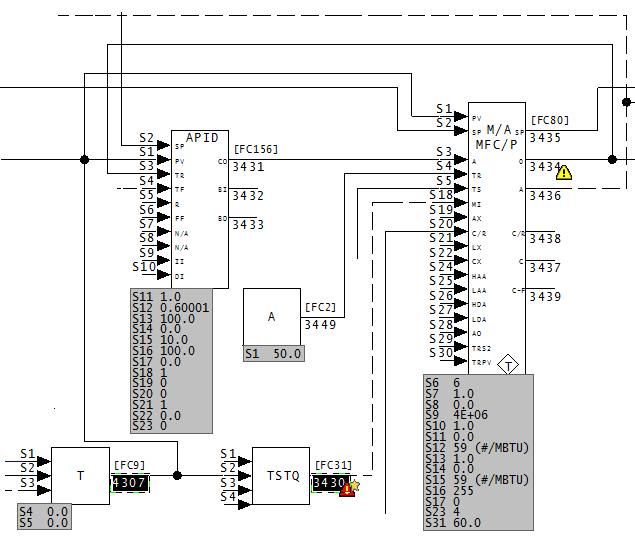 It is disconcerting that a number of the errors flagged look like OR and TSTALM block outputs are being handled incorrectly by being inputs to TSTQ blocks, instead of being OR'd with the outputs.

REDAI Blocks Used Without Being Tested for Quality

There are 46 instances where REDAI blocks can synthesize bad quality, but the value is then used whether or not it is bad. The first one I checked can be bad quality but still control a "FD AIR MASTER" control loop.

The one shown here is kind of cute, if you like scary productions. Good engineering was undone. 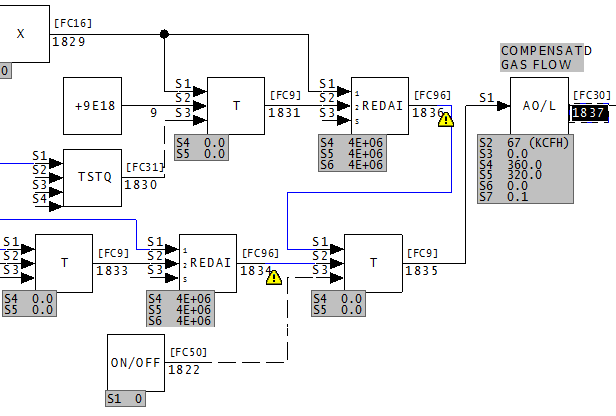 Among the function generator blocks, there are

[The large equal value (X,Y) pairs mean that the output rises at the same slope as the input]

Too Few Inputs
One 8 input Qualified OR block has four inputs, but needs seven to trigger it. It ain't gonna happen! 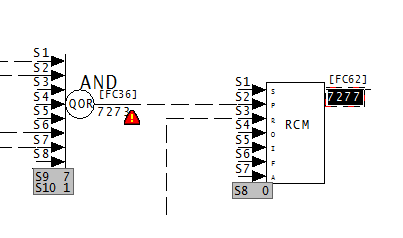 Two rung blocks ignore an input without documentation. If a test is in progress, too bad! 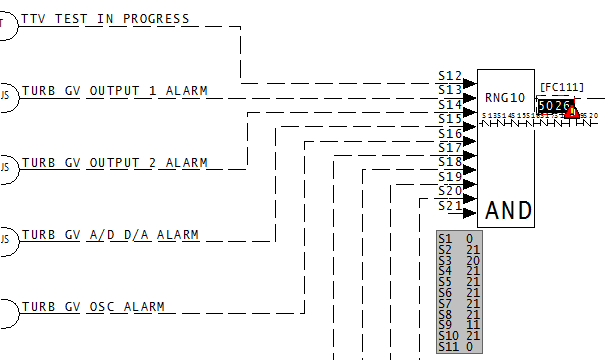 One rung block tests vibration limits, but does not disable the result on bad quality, as designed. 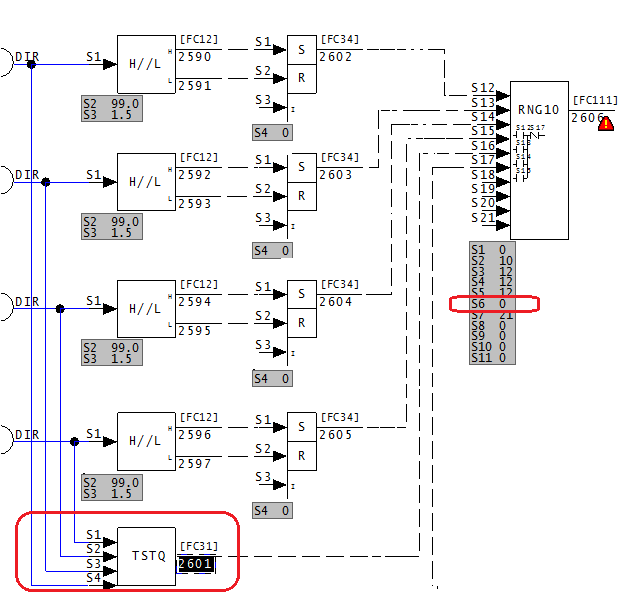 There are 29 DAANG and AO/L blocks giving continuous exception reports.

There are 15 DAANG block tags that are designed to show some or all of 2nd and 3rd high and low alarms that will not do that.

One MA Station has type 5, not defined. Another has its initial mode after startup value set to 0, also not defined.

Posted by Geoff Michaels, P. Eng. at 11:33 AM No comments: Links to this post

This does not look good!

Here is a warning about derivative gain from a site, highlighted in the Error Browser. 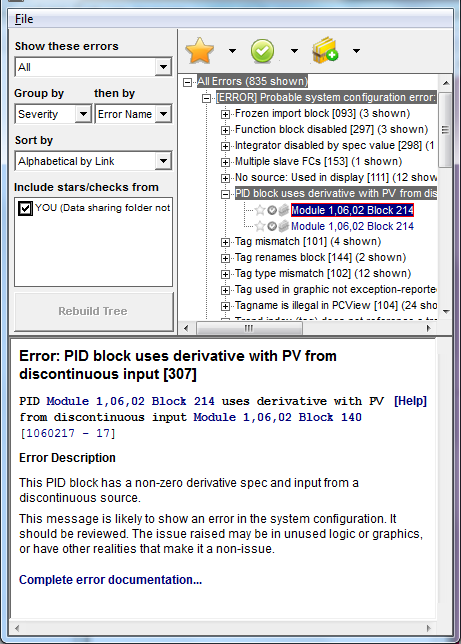 You can see the error marker next to the PID block it concerns. 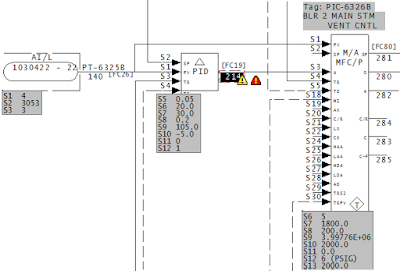 Dan Reynolds sent me the data from the control loop identified. Here is what it looks like with DBDOC WatchWindow at 250 ms. 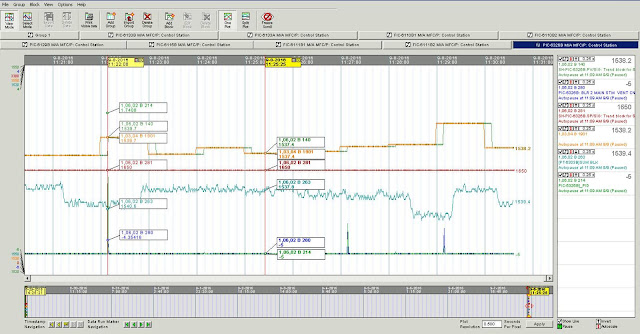 Zooming in a bit, we see that Block 280, the output, suffers spikes from its railed value of -5.0%. Block 214 shows a value of +1.7408%, that is, 6.7408 above the -5.0% it should be. The exception reported input Block 140 changes each minute and drives these spikes (not all of which are picked up in the 250ms reporting interval, since they are so brief). You can be sure that, if the control output were in the 0 % to 100% range, large positive and negative spikes would be suffered every minute. Ouch! 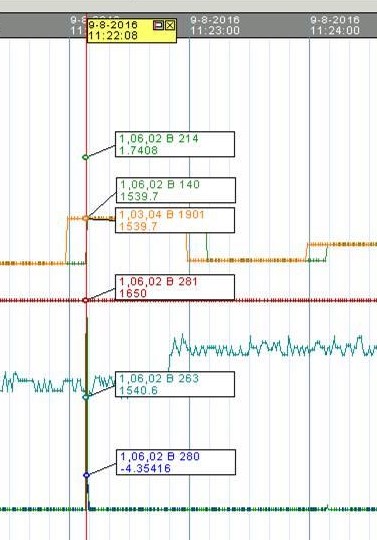 Just as clearly, if this PID output were not driven to -5 %, the spikes would be bi-directional and still significant. The effect is purely caused by the value of Kd on S8 for Block 214, only 0.2, but enough to drive the output in a way that is not valid.

By the way, you should notice how any exception report input has steps in its value. The values for Module 1,06,02 Block 140 and Module 1,03,04 Block 1901 show these characteristic steps. See Monitoring Exception Report Performance for details.
Posted by Geoff Michaels, P. Eng. at 4:22 PM No comments: Links to this post