DBDOC depends on feedback from you, our clients, to provide better and better support for graphics and other system features, as well as support for the ways you actually use DBDOC.

DBDOC 11.2 Feature Update is an improvement on DBDOC 11.2 that addresses issues that came to light as 11.2 was used in the field over the past few months.  If you are upgrading, DBDOC 11.2 Feature Update is now the preferred upgrade version, and is available here.
What does 11.2 Feature Update add to 11.2?
Improved S+ Support
Most significantly, your feedback on DBDOC 11.2 has provided enough information to make a number of improvements to our support for SPlus graphics, such as the following:
Please continue to let us know when you see issues with your graphics, text, or hotspot placement.  DBDOC's graphics support involves a fair amount of reverse engineering, and we are constantly learning more about the file formats we are supporting.
Live Specs on Ladder

In another area, in response to client feedback, Hyperview has added full support for the "new" live specs on ladder diagrams (not just CAD/CLD diagrams).   Prior to DBDOC 11.1, live specs were implemented as a form of live loop annotation, but this could be a highly inefficient use of live data bandwidth, as almost never changing specs were fetched as often as other sorts of live data.  In DBDOC 11.1, specs were integrated with layered specs, and comparisons between live and static specs were automated (read more here).  However, on our first pass, we missed adding this feature to ladder diagrams.   This has now been corrected, and clients with ladder diagrams can now enjoy full-featured and bandwidth-efficient live specs.

Several clients encountered a problem where CIUMON was found to be receiving data only once every 10 seconds from HAOPC.  This has now was fixed and has been subsequently verified in three different client systems. 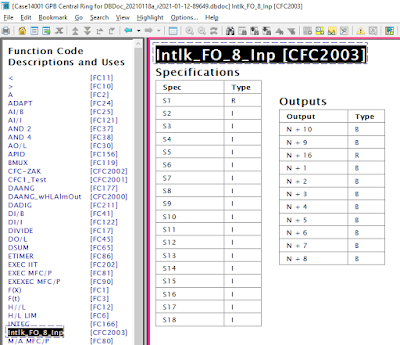 In addition a variety of other minor fixes and additions are included in DBDOC 11.2 Feature Update.   Please contact support @ gmcl.com if you have any questions about what has changed.  It's entirely possible that issues you have seen in earlier versions are now fixed, and if not, we want to know!
Posted by Cherilyn Michaels, MSCE at 4:14 PM